And she went on to become a key figure in Black Lives Matter funding https://t.co/X5JIxVWVFs 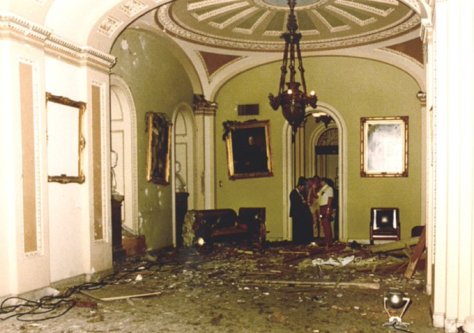 On his final day in office, Jan. 20, 2001, President Bill Clinton commuted the sentences of a pair of radical leftists serving time for bombing the U.S. Capitol building, where a 1983 blast shattered the second floor of the Senate wing.

The FBI landed formal indictments on Evans and Rosenberg in the 1988 “Resistance Conspiracy” case for their involvement in the bombing of the Capitol along with five others. Evans and Rosenberg had already been in police custody for other crimes of the radical left-wing terror group May 19th Communist Organization (M19), named for the birthdays of Malcolm X and Vietnamese leader Ho Chi Minh. According to a historical chronology of the left-wing group by the Smithsonian Magazine, M19 also carried out successful bombings of an FBI office, the Israel Aircraft Industries building, the South African consulate in New York, and D.C.’s Fort McNair and Navy Yard.

“The attacks tended to follow a similar pattern,” the magazine reported. “A warning call to clear the area, an explosion, a pre-recorded message to media railing against U.S. imperialism or the war machine under various organizational aliases (never using the name M19).”

Rosenberg is now a prominent left-wing activist, who, early last summer sat on the board of Thousand Currents which poured $10 million into causes for social justice including Black Lives Matter, according to Fox News.

A historian interviewed by the Smithsonian described the group as an “offshoot” of Weather Underground, the domestic terror group led by Bill Ayers, who bombed the Pentagon and the Capitol in the 1970s and now lives as a prominent academic. M19’s acts of radical left-wing terror appeared to catch a sympathetic eye in Washington that would relieve its members of their time in prison.

2 thoughts on “Left-Wing Terrorists Bombed The Senate In 1983 to Kill Republican Senators. Democrats Let Them Out of Jail.”