And the winner is, Cuomo the lesser. Enjoy:

Our favourite #FakeNews of the 2016 election https://t.co/Onm82JGBbn

I have a question for you. Keeping in mind ethics rules and laws about conflicts of interest:

1 – What if a certain lawyer who represented largest tax cheat in history, billionaire Marc Rich, saw to it that the Clintons were given large contributions in exchange for giving Rich a pardon on Bill Clinton’s last day in office?

2 – What if that same lawyer represented and defended John Podesta, who was Bill Clinton’s Chief of Staff, and is also Hillary’s campaign chairman and kept him out of jail when he was investigated for crimes? Podesta even bragged about how said lawyer saved him from prison. Indeed what if said lawyer became one of John Podesta’s closest friends?

3 – What if that same lawyer, was then appointed Assistant Attorney General of the United States?

4 – What if this same lawyer was put in charge of investigating the illegal IRS targeting of conservative groups and after evidence destroyed, and subpoenas violated, and the IRS top brass plead the 5th, simply decided that no one did anything wrong?

5 – What if the same lawyer, used his position to collude with the Clintons on investigations by  Congress and the State Department Inspector General?

6 – What if that same lawyer was assigned to oversee the FBI investigation of Hillary Clinton and then used his position to deny the FBI access to a Grand Jury?

7 – What if this same lawyer, after the FBI reopened the investigation because of Anthony Weiner and Huma Abedin hiding aforementioned illegal emails on their home computer under a folder marked “Life Insurance,” wrote a letter to Democrats in Congress assuring them that it would be “over” quickly and efficiently?

That one lawyer is Peter Kadzik and if you ask any Democrat they are certain to tell you that all of this was just a mere coincidence. What do you think?

In the video Assange speaks with Dartmouth Films. Among other things Assange insists that the leaked emails did not come from Russia.

We also know from emails released by WikiLeaks that the Clinton campaign plot to smear Trump with the Russian ties allegation went as far back as April.

The source on the FBI investigation is the New York Times who has sided with Hillary Clinton unreservedly.

Amid multiple reports drawing different connections between Donald Trump‘s campaign and Russia Monday night, The New York Times reported that FBI officials’ investigations of the GOP presidential nominee have yet to confirm any ties.

FBI officials said their investigations have yet to find a connection between the GOP presidential nominee and Russia.

The bureau has been investigating the Russian government’s role in the U.S. presidential election. But the FBI believes that the country was likely trying to disrupt the overall race and not trying boost Trump’s chance of getting elected.

RT has an interview with Julian Assange where he demonstrates that Clinton & ISIS terror groups are funded by the same money. Hillary sent arms to both countries.

They go on to day that who ever told Hillary she could use a private server should be drawn & quartered, that this is party suicide and maybe Cheryl Mills was right in saying that Hillary should not run for president. John Podesta responds with, “lets see what the polls say”…maybe they can get away with it.

Read the email for yourself via WikiLeaks: 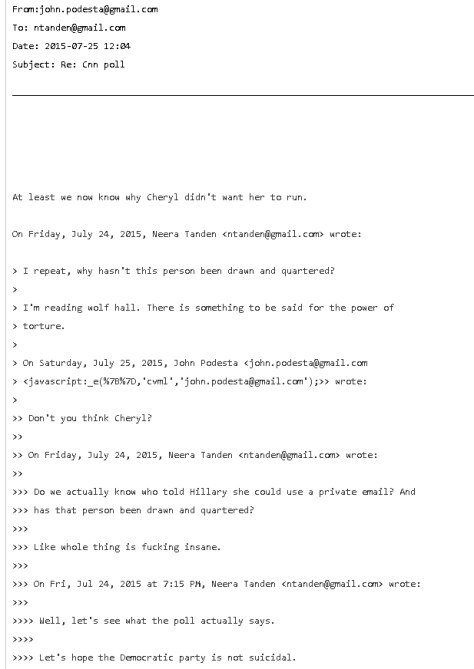 The emails linked below are from Hillary’s campaign staff from March 2, 2015 to March 8, 2015, when the campaign first became aware that the press corps knew of Hillary’s secret server.

The emails reveal that the staff knew of the illegal server and so did her lawyers. They show that President Obama did not learn of the server in “news accounts” as he claimed, but rather, as we wrote back in September, he was using it.

Emails even show the staff mentioning the Federal Records Act. In one email Hillary’s campaign chair John Podesta says to campaign attorney Cheryl Mills, “we are going to have to dump all those emails so better to do so sooner than later.”

And FBI Director James Comey said that they had no intent to break the law….Really?

The Federal Records Act says that government business on email must be archived on government servers. The Espionage Act says that classified information may not go out on unsecured or unauthorized networks. The law is that once something is under subpoena if you delete it, that is obstruction of justice.

Hillary and her staff did all of this countless times. When asked about it the reflexive answer was not just to simply tell the truth, it was to invent the best possible answer to benefit them. This of course, is also obstruction because they know that the FBI and Congress will be asking these very questions. No indication of just telling the truth is suggested.

You can real the email HERE: 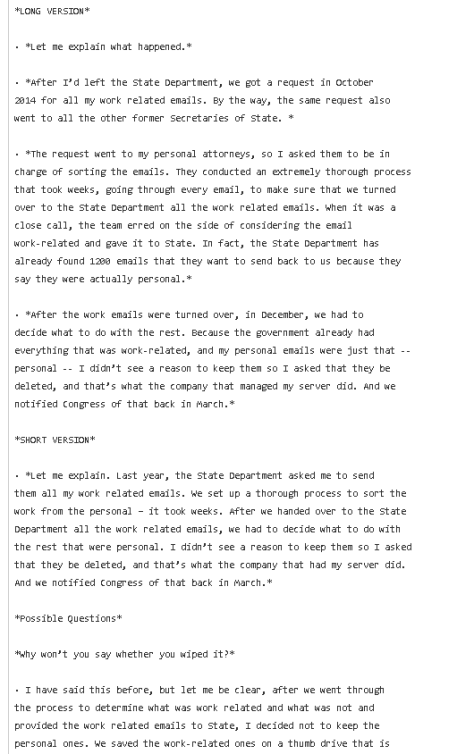 One thing I will never forget about the progressive left in college is that they truly believed that they were born to rule “the rabble.” Remember that old man who stood up to Loki and said, “There are ALWAYS men like you,” well it’s true.

This email exchange is between John Podesta, Hillary’s campaign chairman and Jennifer Palmieri, her communications director. 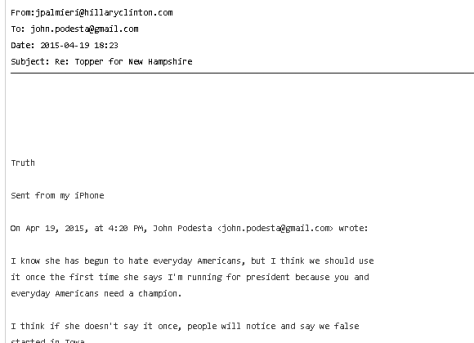 The Obama Administration had current Secretary of State John Kerry asked Ecuador to cut off his access to the internet, but it made no difference.

Assange, who has been in refuge in Ecuador’s embassy in London for more than four years, saw his access to the internet cut over the weekend.