No one lights up a crowd like Allen West.

Florida Republican Rep. Allen West defended his skepticism surrounding the September non-farm payrolls report in an interview on CNBC early this afternoon. The so called “objective reporter” from NBC’s cable channel,  Tyler Mathisen, got rather testy with Allen West and tried to interrupt him so he could not explain his point of view. West would have none of Mathisen’s nonsense. Mathisen is on the verge of becoming unhinged during much of the interview skin to a Chris  Mathews meltdown.

Here is the exchange:

MATHISEN: “You are alleging specifically that the president is engaging in a cover-up of the data. You are saying that the administration is actively manipulating that data. Correct?”

WEST: “Well, if you would stop yelling in my ear and allow me to answer your questions, maybe we could get to the bottom of this. When you look at the GDP numbers — which have gone from 4.1 percent, then it went to 1.9 percent, then it was at 1.7 percent. It got revised down just about a month ago to 1.3 percent. We’ve got numbers that are all over the place. And we don’t understand the direction this economy is going. … I don’t see these numbers that people are talking about, and I don’t see how they can come back later in this month and say they’re revising the numbers from July and August. So I’m very questionable with what we do see out of this administration, because the numbers don’t add up.

I think it is very extreme Keystone project that could have provided 23,000 direct jobs and over 100,000 indirect jobs because of the environmental lobby the President decided not to do it.

I think it is very extreme when you create 71,000 pages of new government regulations a year when you have a “Regulations Czar” who is saying they are scaling back on new regulations.

He is SO right about this.

“I don’t care about my critics, I understand that my country is at a very perilous situation and I’m going to use the type of words that are necessary to get the attention of the American people.”

Some recovery. Initial claims for unemployment have been between 380,000 and 415,000 (that is 400k lost jobs per week) every time we have checked for three years now. Democrats called the George W. Bush recovery a “jobless recovery” even when unemployment dropped well below unemployment under President Clinton.

For those who continue to complain that “We the People”, mainly conservatives, are cutting government too much, this should put everything into perspective. I know liberal progressives dislike me because we promulgate the truth which for them is like sunlight on a vampire. America, we are becoming a socialist egalitarian welfare nanny state and hardworking American taxpayers are on the road to Serfdom. 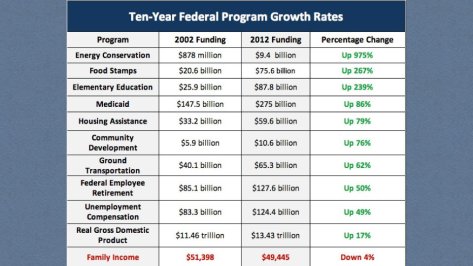 Conspiracy nuts have gone crazy with the misinformation they put out.

Fast & Furious was a plan by the Obama Administration to deliberately ship guns to Mexican drug cartels and use the deaths and violence as a reason to pass new gun laws. They were caught by ATF agents who blew the whistle.

There is a reason why the GOP is called “the stupid party”.

Local GOP machines are often circular firing squads rife with clique’s and personality wars. Many of the best GOP candidates try to have nothing to do with their local machine. I cannot say for a fact that this is the case in Florida but GOP operatives are very aware that this is a nationwide problem.

Remember what I said about stupid?

And, in Florida the Republican-drawn map, which has to adhere to a new fair redistricting law, makes a tough reelection fight for Rep. Allen West (R) even tougher. His seat goes from one Sen. John McCain (R-Ariz.) would have won 48 percent to one in which the 2008 GOP nominee would have won just 44 percent.

While it’s just a first draft, the Republicans’ decision to weaken West doesn’t bode well for his chances under the final GOP plan.

Freshmen are generally more vulnerable in redistricting, lacking the senority [sic – Look a spelling error in the WashPo – Editor] to fight for safer seats. Outspoken tea party [Tea Party is supposed to be capitalized  or can also be spelled TEA Party as TEA is an acronym – Editor] conservatives are in even more danger, because even in GOP-controlled states, establishment politicians are usually the ones drawing the maps.

This would move Florida 22 from a D+1 district to a D +5 which is almost impossible to win.

Frankel has raised a total of $1.1 million since starting her campaign. Murphy has raised $1.2 million.

Fun fact – Much of the money Frankel and Murphy raised will have to be spent in the Democratic primary. West does not have, and is not like to have, a serious primary opponent.

Nope, West is just going to keep raking in the dough. A few more million for West and the DCCC may take West off their target list.

No matter how much Democrats would like to get that seat back, Frankel and Murphy are going to need a whole lot more cash to pull it off.

Unless of course the Florida GOP does the work for the Democrats. Take this seriously folks, there are many “establishment” GOP types who would rather see a Democrat elected than principled conservative. We have seen it in NY special elections, we have seen it with David Brooks and David Frum, and as Rush Limbaugh and so many others have pointed out for years, there are some in the GOP who believe that we are better off as a minority party in the US House. One of the reasons for that is because there are many in the GOP who talk conservatism but whose bread is buttered by government largess.

Florida Republicans need to start demanding some new party leadership and/or start opening your wallets and start funding challengers (or at least threatening to). They will tell you that “the rules are making us gerrymander him out”. Don’t you buy that for a minute.

Now some of you will watch this and think he is being over the top. But is he?

Allen West he defines tyranny as the Founders did. Think about the situation, what would the Founders think of the following:

All three branches of government are now legislating on their own and against the will of the people. We have a breakdown of separation of powers. Federalism is all but eliminated. Government is infringing on private property rights more and more, government owns most of the land west of the Mississippi to prevent us from using our own resources, Congress banned the Thomas Edison light bulb, government uses the tax code and other regulations to pick winners and losers and funnel money to their allies, judges and other office holders do not respect the limits of their office or the Constitution. The government is becoming so big that it is becoming ungovernable.

Congress spent almost $4 trillion last year with $2.08 trillion of that being new deficit spending which is 10 times higher than the yearly deficit the last year the Republicans had budgetary control.