How many times has this happened? Republican’s like Pat Toomey and Ben Sasse say all the right things. Judge nominees like John Roberts, Amy Barrett, Brett Kavanaugh, and Doug Souter promise to obey the Constitution and the moment they get into office they cannot even obey the plain text of it?

The time of political reckoning is at hand. It finally seems like the American people have figured this out. The merging of the US Government, mega corporations and the CCP have created a corrupt monster that must be defeated and exiled forever. They have not even taken power officially yet and they are already over reaching.

Yours truly blogged for Pat Toomey and helped him get elected. We even follow each other on Twitter: 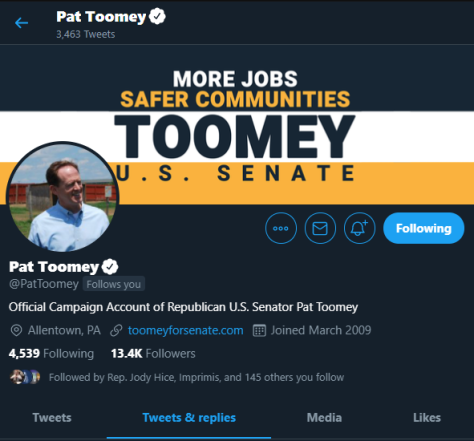 Radio personalities like Jim Quinn and Rose Tennant leveraged their massive audience to make it possible for him to get elected and after he got in the betrayals began and have been tolerated. No more.

As much as it pains me, if certain Republicans are a part of the swamp we must make sure that if they do not lose in the primary, they lose in the general. No more Mr. Nice Voter!

Do not vote a GOP straight ticket, study each candidate and if someone is a swamp creature like Mitch McConnell or Pat Toomey or Ben Sasse they must go…as painful as it may be.