Yahoo News reports that the CIA had a plot to kill Julian Assange. Yahoo, as well as other news reports claim that Trump CIA Director Mike Pompeo was involved. The Trump White House rejected the idea.

The thinking at the CIA and other members of the Intelligence Community (IC) is pervasive, that foreign journalists are not US citizens and thus are not protected by the First Amendment, making them fair game.

This is the kind of convenient thinking one expects from a juvenile. If the First Amendment doesn’t apply than neither does the right to a trial, the right to council, cruel and unusual punishments etc. The slippery slope to just killing a foreign journalist gets real short. Indeed, according to such Orwellian thinking, just killing any foreigner is almost encouraged by the Constitution. Such thinking is beyond disturbing and no one with such a view should be in a place of power.

The corporate media is unreliable, dishonest, hyper-partisan against Republicans, easily and often willingly manipulated by the IC, and behave as apologists for the CCP. To say that they have credibility problems is an understatement. The corporate media was a willing co-conspirator in the Trump/Russian Collusion hoax among a list of lies, schemes and hoaxes.

Pompeo, in a speech to Hillsdale College on Monday, denied any personal involvement, but he did not deny that such a plot did exist at the CIA:

Pompeo’s speech was a good one and worth watching. He spoke about morality, the right to life, the Constitution, praised civil disobedience to the lock downs and everything that a student a Hillsdale would like to hear. [Editor’s Note – The entire video of Pompeo’s speech to Hillsdale will appear in the first comment below this editorial.]

We also noticed that he chose his words very carefully. Politicians by their nature are masters of “escape hatch language” – a way of speaking that gives an out if an inconvenient truth comes out.

So what is the truth?

Our honest answer is that we don’t know, but we can say that there is evidence and reporting that would point to his guilt as well as his innocence. We will lay much of that evidence here and readers will have to decide for themselves.

Was Pompeo really in Control of the CIA

History shows that the CIA has been all too willing to go rogue, disobey elected officials and meddle in domestic politics. It has done so since the days of Allen Dulles.

The CIA openly defied President Kennedy on Cuba and many credible people believe, with some supporting evidence, that Lee Harvey Oswald had some kind of relationship with the CIA since he was a young Marine.

The CIA is almost as partisan against Republicans as the corporate media.

The CIA and leadership in the IC manipulated Iran Intelligence in order to embarrass President George W. Bush. The Valerie Plame scandal was a hoax perpetuated against Bush by the CIA. The CIA, as well as former CIA Director John Brennan, was chin deep in the “insurance policy” plot to frame President Trump on Russian Collusion and the Ukraine Hoax.

Take John Sipher as one example of many:

[Editor’s Note – Notice how Sipher indicates that he works or the Atlantic Council, this is very revealing:

The United States offered billions in loan guarantees to Ukraine in an effort to divorce itself from Russian capital and re-privatize it’s economy.

Vice President Biden and the State Department used its influence to get certain state run assets to certain wealthy oligarchs, such as Ukrainian Billionaire Victor Pinchuk, for bargain prices. In exchange, Biden, the Clinton’s and others would get a cut.

Vice President Biden got his cut via money sent to his son Hunter. Pinchuk’s political ally Nikolai Zlochevsky put Hunter Biden on the board of Burisma, a Ukrainian gas company in which Hunter Biden’s business received monthly payments of over $166,000.]

Sipher’s Twitter feed is filled with over the top Trump Delusion Syndrome. Below is what he posted in the last 24 hours at the time of this writing.

Sipher retweeted unhinged never Trumper Bill Kristol and known liars such as disgraced former FBI lead agent Peter Strzok. Strzok rigged the Hillary Clinton email investigation in her benefit and was outed by his own emails and text messages. He  was a key “insurance policy” conspirator in the effort to frame President Trump for Russian collusion. 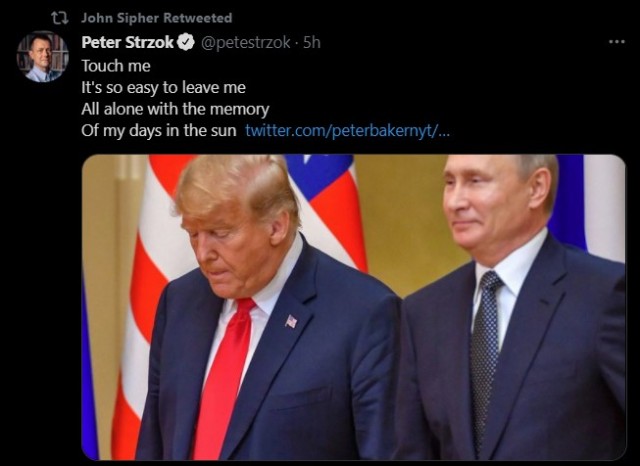 There is so much of this kind of partisan invective from ex CIA and “access media” that covers the IC we could keep posting virtually non-stop. Notice how Sipher calls former CIA Director Pompeo a vile dolt while claiming the CIA’s innocence.

Considering the culture of partisan animus at the CIA one must ask just how much control over the CIA did Pompeo actually have? In speeches he has declared how he faced massive bureaucratic resistance as if he was not in charge. Judicial Watch reported that while Pompeo was running the State Department under Trump, State Department lawyers were in court defending Hillary Clinton and resisting investigations of her wrongdoing from when she was Secretary of State.

There is an old saying in Washington about political appointees, “either you capture the agency or the agency captures you.” In the case of Mike Pompeo it seems the latter is the case.

President Trump benefitted from Wikileaks’ publishing of Democrat Party emails showing criminal activity at the Clinton Foundation, reporters who were secretly in collusion with the Clinton Campaign, how the Democrat Primary was rigged against Bernie Sanders, racial invective towards minorities and how Hillary was given the questions in advance that were to be used at a CNN debate.

Political wonks like yours truly were well aware of Clinton corruption since the 90’s, but the average voter didn’t have their eyes opened to the magnitude of it until WikiLeaks published the emails.

By and large what Wikileaks published was embarrassing facts, government cover up of obvious criminal activity by those in power, and the proof delivered by Ed Snowden that the IC was engaged in mass illegal domestic surveillance of the American people.

The IC wanted to eliminate Assange for some time. Yahoo, the Washington Post, The Intercept and UK press all report that the CIA’s outrage boiled to a bloodlust after Wikileaks published Democratic Party and Clinton campaign emails which exposed their criminal activity and true nature.

From one of the Clinton emails:

The corporate media in the United States all but ignored what WikiLeaks revealed (LINK – LINK – LINK), but with alternative media the cat was out of the bag. 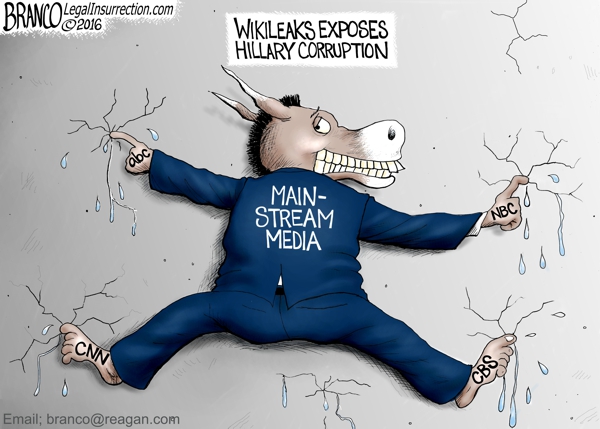 The CIA could not present “partisan outrage” as a reason for their new zeal for going after journalists. The cover story, and we have heard it a million times it seems, is that anyone who publishes something they don’t appreciate is a Russian agent.

How effective was the CIA influence on press and media figures to justify the summary execution of Julian Assange and those who worked with him? Watch this:

As one can clearly see by the video, the IC wanted to bump off Assange before Trump and Pompeo came into the picture. Therefore the corporate media/IC effort to pin this on Trump and Pompeo is just more partisan gaslighting and a rewrite of history. Trump’s White House lawyers put a stop to the CIA plot to kill Assange. Some of the corporate media reported this albeit buried it many paragraphs deep.

Is Mike Pompeo responsible for the plan to kill Assange? The available evidence seems clear that the IC had the intent to kill Assange before Pompeo became CIA Director. That intent amplified to a bloodlust after WikiLeaks exposed Clinton/DNC corruption. Did Pompeo go along with it after he became director and now is double talking his way out of it? Judge the reporting and decide for yourself.

What is clear is that Pompeo did not have control of the CIA when he was Director or the State Department after he was promoted to Secretary of State. Both agencies actively worked to destroy Trump’s presidency. In their partisan derangement they hated Pompeo just as they hated Trump.

UPDATE – If Isikoff made up the plan to Kill Assange than how is it classified? How is hot air classified? Also Assange told the Washington Post much earlier that the CIA had a plot to kill him.