Today’s Election audit results in Maricopa County Arizona were breathtaking. It is no surprise that Democrat’s did everything they could to not comply with the law. There is little doubt that the results should result in criminal prosecutions.

[Editor’s Note – This is Phase II of the audit. Phase I was completed July 15 and can be found HERE. Phase III of the audit will come as many of the ballots (provisional and undeliverable), and routers were not provided by Maricopa County and should re released now that the county has relented.]

Keep in mind what you are about to see is on one Democrat controlled county.

25% of the duplicates came in AFTER November 4th.

Obvious computer generated counterfeit ballots. The verified stamp is supposed to be manually stamped by the elections worker after “signature verification”. As you can see these were generated with a fake stamp that was rendered by the computer below the triangle.

255,326 early votes do not have the proper database entry. 9,041 mail in ballots returned more ballots than they were sent.

Election servers had not had Windows or antivirus updates in a year which made them wide open to hackers. Maricopa Democrats said that this was needed because no changes can be made to the machines after they are “certified”  –  no real certification would force a computer network to be wide open to hacks and malware – but even after that date look at the 1,500 files on the servers that were changed by someone running executables on those machines after the “certification.”

Also against the regulations, Democrats had multiple people using the same username and password on the servers and computer stations. Is it any wonder that they used force to get Republican elections lawyers and election workers out? 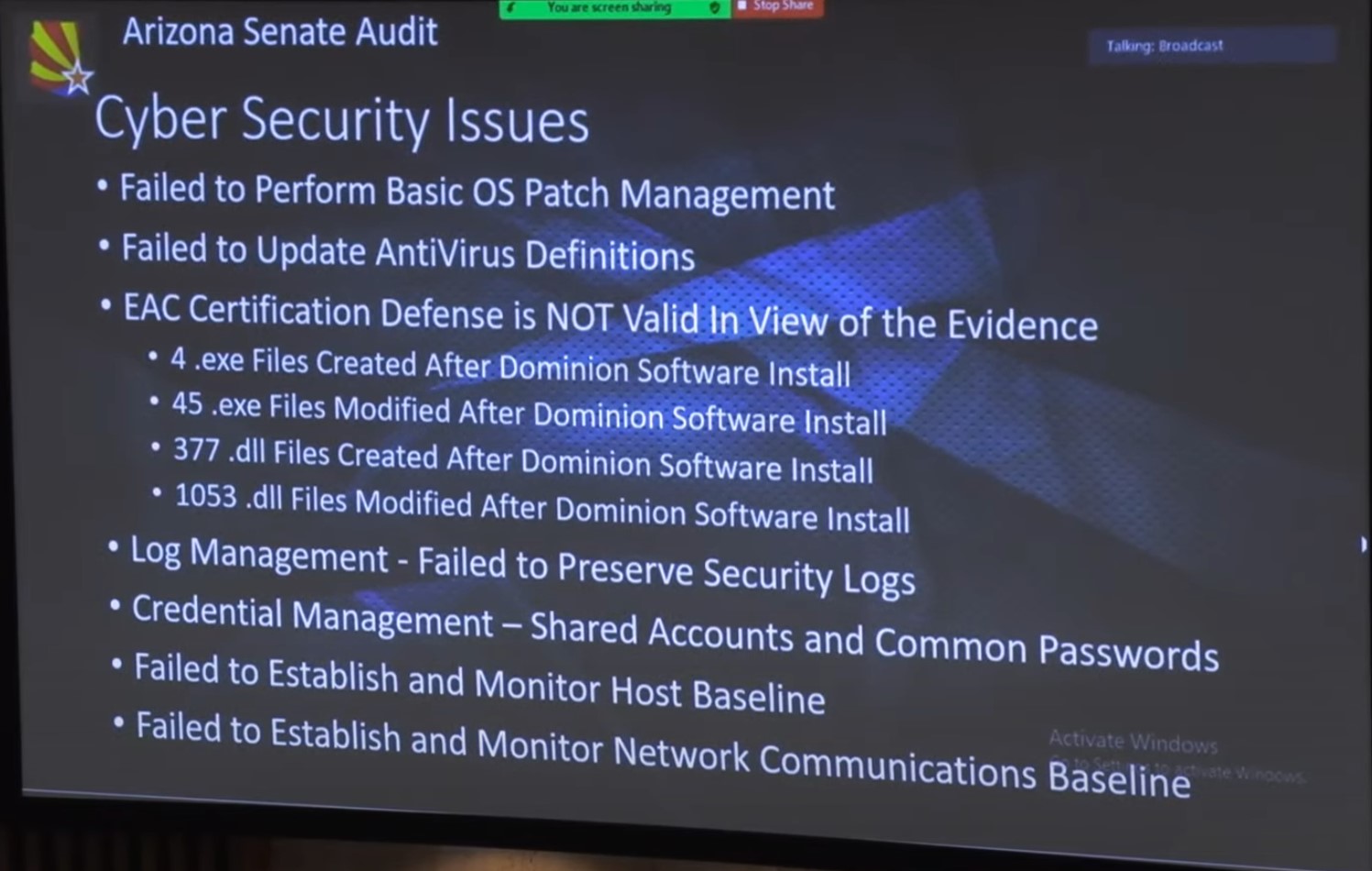 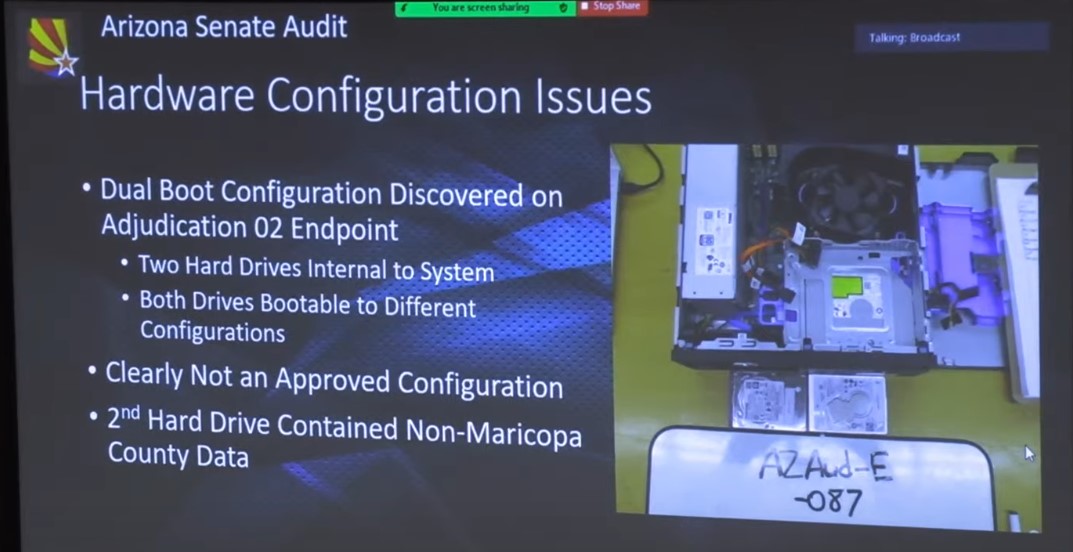 In violation of the law, state and court subpoenas Democrats deleted over a million election files up to the day before they were handed over for the audit. An obstruction charge is possible.

Most of the Windows activity and security logs were deleted. 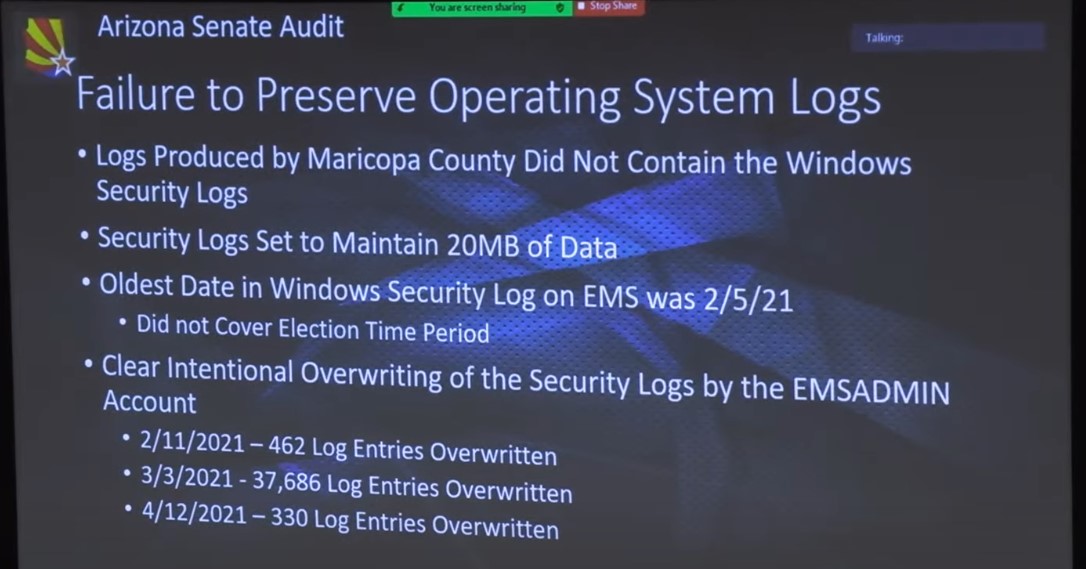 Election servers had atypical wide open IP ports (super easy to hack), atypical anonymous logins (an indication of outside hacking or access)  and check this out – Windows Remote Access and Terminal Services were turned on – you turn those on when you want to let someone run the computer from afar.

Against the rules and the claims of Maricopa Democrats who said that the election machines were not connected to the internet, remaining logs show that election servers and some client stations were accessing the internet both wired and wirelessly.

Full video of the results hearing in front of the Arizona Senate:

[Editor’s Note – In the presentation the duplicate ballots Doug Logan refers to are damaged ballots that could not be scanned so they had to be hand duplicated.

In these ballots Maricopa County was only off by 360 ballots which was within the margin of error resulting in Trump getting 261 less votes and Biden getting 99 more.

This is NOT The 17,233 undamaged ballots that were duplicated and scanned 2-4 times each in the system found by Dr. Shiva Ayyadurai. Those spreading disinformation are deliberately concealing that important distinction.]

It is not a conspiracy theory. Biden says it directly and did so on CSPAN:

Democrats and their allies in the corpomedia went ballistic screaming that Trump was putting border crossers in cages like animals, all while showing you pictures of illegals that Obama put in cages back in 2014.

Biden is allowing 200,000 illegal border crossers a month and the conditions are far worse than cages as well have all seem. But where is the outrage now? Did Democrats even care a lick about those people?