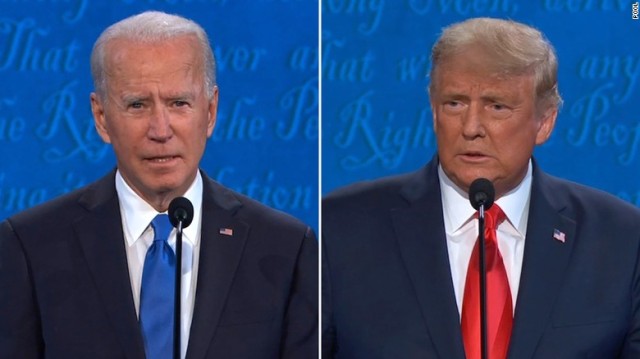 This was campaign suicide. Joe Biden lost the debate in five areas:

1 – “I do not want to ban fracking, post the tape…” and post the tape people are. Biden and Harris have said this as least half a dozen times on video that is all over social media.

No one is going to let this go. This was absolute campaign suicide.

2 – After committing debate suicide. After lying about having The Green New Deal (banning gasoline cars, rebuilding every building in the USA, banning fossil fuels) on his web site at the last debate. After denying he wanted the AOC Green New Deal tonight, Biden followed  his “post the tape” challenge to Trump saying he wants to transfer away form all fossil fuels for renewables like wind and solar, which everyone knows does not provide nearly enough energy to heat homes and run the economy it.

Joe Biden says he will "transition from the oil industry" pic.twitter.com/0TgtYhhLEZ

Being energy independent, largely because of Donald Trump, is why the economy boomed before COVID but is also why we no longer need to get involved in endless wars over oil and energy security.

Sounds just like Obamacare and the American people took Congress away from the Democrats over it.

I LOST MY INSURANCE UNDER OBAMACARE!

SO DID DRUDGE, SO DID EVERY FREELANCER, SO DID
EVERY SOLE PRACTITIONER.

Is his “memory failing him” or is he just lying? https://t.co/FK5CkpQ3m3

[Editor’s Note: Full disclosure – Yours truly lost his insurance under Obamacare. The “affordable” replacement plan more than tripled my premiums and increased my deductibles from $300 per year to $6,000. This forced me to put my daughter on government assistance so she could get care.]

5 –  Corruption. If the new evidence bomb from Hunter Biden’s laptop being delivered to the Senate tomorrow ends up being legit, all of the social media censorship in the world won’t keep people from learning about this story.

Wow. A human nuclear bomb just hit the Biden campaign and his name is Tony Bobulinski. He's the former CEO of the company the Biden's formed but seeing their corruption and lies, he knew he had a patriotic duty to speak up. He's only donated to Democrats in his life. #debates pic.twitter.com/DagmPwAXJH

Just heard the Biden defense: No big payoffs in my tax returns. If that was a thing, we’d have to have dropped every criminal case in history.

For a detailed explanation of the Biden pay for play and how it all worked, this Canadian VLAW Blog did a great job of explaining it so anyone can understand:

How would you like to run for president against an incumbent who did so well on foreign policy that the debates don't even need to include that topic? That's actually happening.

Anyone who does business in China or uses Chinese shipping needs a bank account there. Changes in Tariffs and the exchange rate are handled with short term loans.

If not for that trade would come to a screeching halt.

Yes there is such a thing as institutionalized racism it's called the 1994 Biden crime bill.#DebateTonight #debate #debates #TrumpMeltdown #trump2020 #CrookedJoe

Duke was sentenced to life in prison for a 1st time, non-violent crime because of Joe Biden’s 1994 crime bill.

We pray that you will do much good with your second chance Duke!

Biden in 1993 speech pushing crime bill warned of 'predators on our streets' who were 'beyond the pale' – CNNPolitics https://t.co/piVwNBy8RX

Trump won this debate, handily. Biden wasn’t a force at all. Trump was substantive, on-point, well-tempered. Definitely helped himself, when it mattered most.

CNN is trying to debunk the Hunter Biden stories without telling viewers what the stories are. It is mind-boggling.

James Biden writes to #HunterBiden about @JoeBiden meeting with “the O” about “outrageous acquisitions” and “the two biggest days of our business life” in an e-mail from October 1, 2017.

Biden tonight said he would put 11 million illegal immigrants in America on a glide path toward citizenship. What he did not tell voters is that he would provide them all government-run health care (aka "Bidencare"),even though he is on record saying he would. So is Kamala Harris

I run power plants… I’m out of a job😏

Biden who accused Romney and the GOP of wanting to put black Americans back in chains, has put oil on racial fires himself. Not to mention “you ain’t black” and blacks lack diversity. Biden plays off of stereotypes himself. (Not to mention foreign speakers at 7-11s).

Biden says he had a Republican congress. False. Obama had a Democrat congress until 2010. They had a super majority for the first part of the Obama’s first year until special elections. Absolutely lie.

The only thing worse than COVID-19 would be BIDEN-20