When telling  “the whole truth” complete quotes and the context it is said in is everything.

For example two quotes from the Bible are “and he hanged himself” and “go and do likewise.” Taken by themselves someone could build a false narrative around this and make the Bible seem horrible. In fact that is the very tactic that anti-Christian zealots use as a matter of routine.

The FBI could ask you what the color of a perp’s car was and you say read and later the FBI comes back at you and says “No it was magenta” and charges you with the “crime” of lying to the FBI. What the FBI does in real life is not far from this example. The Russia hoax investigation is full of such sophistry.

Redefining terms, playing games with the language and out and out falsehoods are an accepted tactic of the far left. Fully endorsed by leftist luminaries such as Antonio Gramsci, Walter Lippmann Lenin, Stalin, Lenin, Mao, Cloward & Piven, Saul Alinsky as well as most any critical theorist.

Objective truth is simply not a value of the left. To them the “truth” is anything that advances “progress” towards socialism/communism.

British politician and civil rights leader Nigel Farage is a strong supporter of Israel. His speeches and actions over the years show this countless times. Farage has met with and supported strong Israeli leaders. Yet examine these headlines LINK – LINK: 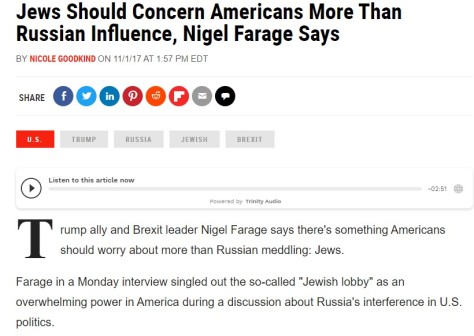 The Newsweek piece says that Farage claimed that Israeli influence is more than the Kremlin and advanced the Trump/Russian influence hoax and the second actually has the word “anti-Semitism” right at the top.

Newsweek even goes so far as to claim this:

Nigel Farage said nothing of the kind. This is straight up libel.

In the actual conversation Farage dodges the caller’s obvious anti-semetic far left invective and uses a diplomatic dodge to get rid of him. A caller named Ahmed told Farage that he thought the pro-Israel lobby in the United States was as dangerous as alleged Russian interference.

“Well, the Israeli lobby, you know, that’s a reasonable point, Ahmed, because there are about 6 million Jewish people living in America, so as a percentage it’s quite small, but in terms of influence it’s quite big. Well, in terms of money and influence, yep, they are a very powerful lobby,” “There are other very powerful foreign lobbies in the United States of America, and the Jewish lobby, with its links with the Israeli government, is one of those strong voices.”

Farage’s tone made it clear that he thought the rest of Ahmed’s point was unreasonable.

Israel is our greatest ally in the Middle-East and in the United Nations. Israel fights terrorists over there who would be coming over here if not for the marvelously effective Israeli security forces. Israel has saved countless American lives so they should have the influence that such an ally deserves. What was Farage supposed to say in response to the nutty caller, “No, Israel has a weak and ineffective lobby.”

No one can control what a caller says in a call in show, which is why this attempt to smear Nigel Farage in 2017 caught no traction because it had no merit.

One thought on “Anatomy of a Smear: Corporate Press Deliberately Misquotes Nigel Farage”