Instead Democrats are using the virus as an excuse to make government and economic power grabs, choosing winners and losers.

Biden Admin is releasing countless thousands of illegal border crossers in McCallan  even though many have COVID:

Why should it be easier to go to the Gym than to vote?

Why is no ID, no signature or address verification /w mass mailout ballots the most secure election in history yet, according to today’s Democratic Party as well as leftists in Canada, one should be forced to show a medical passport to go to a gym or a restaurant?

How about we sell guns by mail with no ID or signature verification?

Black Lives Matter sounds good, as good people cherish life and believe everyone has the potential to make an impact for the better. When one looks beneath the surface of those who espouse BLM and CRT the hypocrisy reveals itself. Extended examination shows that it is not genuinely about minority empowerment at all.

This is going to make food prices go crazy as well as anything delivered by a truck. So much for pizza delivery…

Do you ever wonder if the Democrats are destroying the economy on purpose?

More on the per mile tax plan HERE.

So much for infrastructure. Is this what your Member of Congress promised you?

$20 Billion to ‘Advance Racial Equity and Environmental Justice’
The proposal sets aside a whopping $20 billion—more than the latest COVID package spent on vaccines—for “a new program that will reconnect neighborhoods cut off by historic investments and ensure new projects increase opportunity, advance racial equity and environmental justice, and promote affordable access.”

$175 Billion in Subsidies for Electric Vehicles
Electric vehicles: A technological novelty so good it won’t catch on without hundreds of billions in subsidies. At least, that’s apparently what the Biden administration thinks, as its infrastructure proposal earmarks a “$174 billion investment to win the electric vehicle market.”

The spending will take the form of manufacturing subsidies and consumer tax credits, which historically have benefitted wealthy families most. For comparison, the proposal carves out more for green energy goodies than it does on the total $115 billion to “modernize the bridges, highways, roads, and main streets that are in most critical need of repair.”

Sounds familiar doesn’t it? This why New York Governor Cuomo put COVID patients in nursing homes turning them into super spreader mills. Governor Whitmer in Michigan did the same.

The left has always been fascinated with social engineering including population control, eugenics and culling the elderly. Playing God is unwise.

Via the UK Telegraph.

Does the plexiglass really make a big difference? The cashier is touching all your items….right after you just touched and breathed all over those items right in front of you in your cart as you walked through the entire store….so the cashier really isn’t so well protected is she? 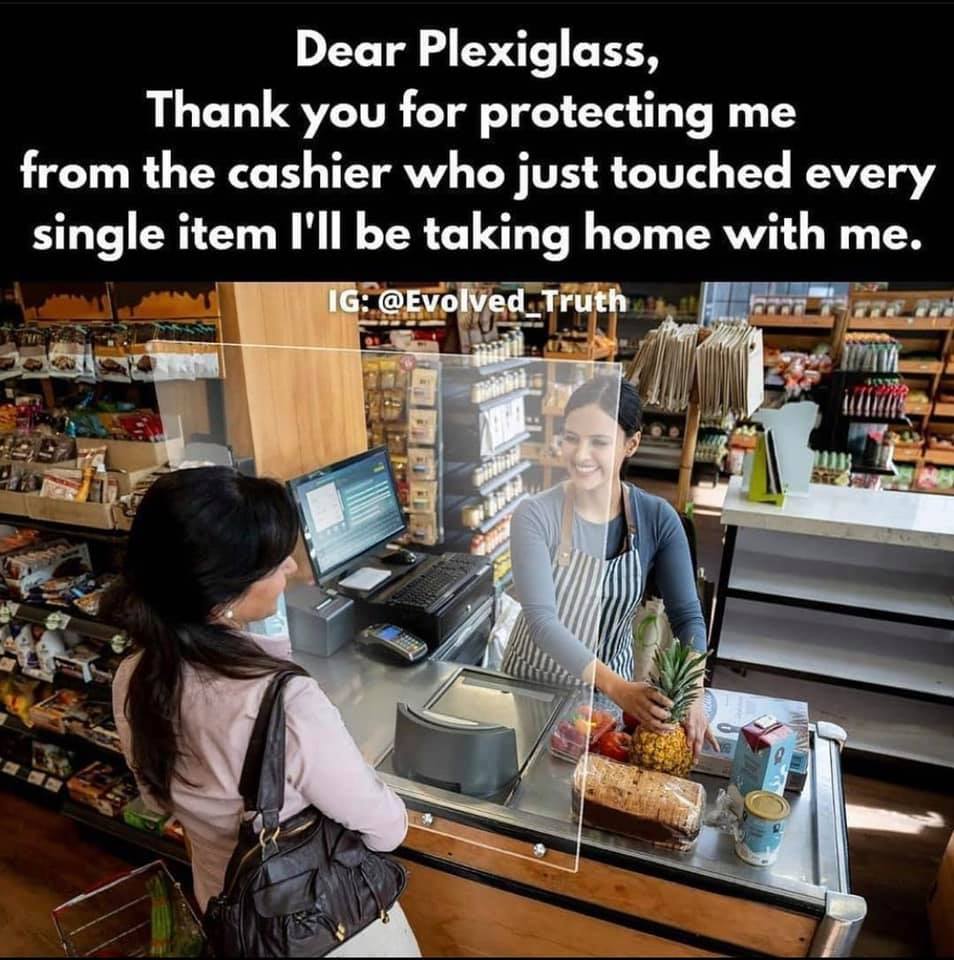 And via the great Antonio F. Branco:

When telling  “the whole truth” complete quotes and the context it is said in is everything.

For example two quotes from the Bible are “and he hanged himself” and “go and do likewise.” Taken by themselves someone could build a false narrative around this and make the Bible seem horrible. In fact that is the very tactic that anti-Christian zealots use as a matter of routine.

The FBI could ask you what the color of a perp’s car was and you say read and later the FBI comes back at you and says “No it was magenta” and charges you with the “crime” of lying to the FBI. What the FBI does in real life is not far from this example. The Russia hoax investigation is full of such sophistry.

Redefining terms, playing games with the language and out and out falsehoods are an accepted tactic of the far left. Fully endorsed by leftist luminaries such as Antonio Gramsci, Walter Lippmann Lenin, Stalin, Lenin, Mao, Cloward & Piven, Saul Alinsky as well as most any critical theorist.

Objective truth is simply not a value of the left. To them the “truth” is anything that advances “progress” towards socialism/communism.

British politician and civil rights leader Nigel Farage is a strong supporter of Israel. His speeches and actions over the years show this countless times. Farage has met with and supported strong Israeli leaders. Yet examine these headlines LINK – LINK:

The Newsweek piece says that Farage claimed that Israeli influence is more than the Kremlin and advanced the Trump/Russian influence hoax and the second actually has the word “anti-Semitism” right at the top.

Newsweek even goes so far as to claim this:

Nigel Farage said nothing of the kind. This is straight up libel.

In the actual conversation Farage dodges the caller’s obvious anti-semetic far left invective and uses a diplomatic dodge to get rid of him. A caller named Ahmed told Farage that he thought the pro-Israel lobby in the United States was as dangerous as alleged Russian interference.

“Well, the Israeli lobby, you know, that’s a reasonable point, Ahmed, because there are about 6 million Jewish people living in America, so as a percentage it’s quite small, but in terms of influence it’s quite big. Well, in terms of money and influence, yep, they are a very powerful lobby,” “There are other very powerful foreign lobbies in the United States of America, and the Jewish lobby, with its links with the Israeli government, is one of those strong voices.”

Farage’s tone made it clear that he thought the rest of Ahmed’s point was unreasonable.

Israel is our greatest ally in the Middle-East and in the United Nations. Israel fights terrorists over there who would be coming over here if not for the marvelously effective Israeli security forces. Israel has saved countless American lives so they should have the influence that such an ally deserves. What was Farage supposed to say in response to the nutty caller, “No, Israel has a weak and ineffective lobby.”

No one can control what a caller says in a call in show, which is why this attempt to smear Nigel Farage in 2017 caught no traction because it had no merit.