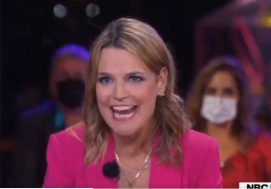 In short, the NBC moderator Savannah Guthrie, whose husband used to work for Al Gore, was in full blown sea monster mode for the first half of the Trump town hall. After Trump denounced racism for the 4th time she said he was dodging…

The Biden town hall on ABC was dull, was all about softballs and not one question came up about the Chinese, the Russians, Ukrainians etc paying his son millions and millions for access.

WTF is wrong with that psycho from NBC? Who cares about q-anon? Have they burned a city or killed an ex police chief? As far as I know they just talk on social meda…so who cares? https://t.co/4nzj9z3wgK

If I can't unsee it, neither can you. pic.twitter.com/opzW7peyHM

A third of the way into the NBC town hall and NO questions from the PEOPLE!!!

Looks like Trump is doing a debate, after all tonight.

Has any media person ever challenged Biden like Savannah Guthrie is with Trump?

I just switched to NBC since ABC is in a commercial. Savanah Guthrie has interrupted Trump in these 60 seconds more than Stephanopulos has done to Biden in 40 mins. NBC is an interrogation. ABC is a picnic.

Savannah Guthrie posture toward Trump compared to Lester Holt’s toward Biden is night and day.

ABC is doing everything they can to keep Joe Biden comfortable.

Meanwhile, Savannah Guthrie is attacking the President like she openly hates him.

This NBC thing with Mr. Trump is a complete setup. Ms. Guthrie is hostile. Meanwhile, it’s a smooch fest between Stephanopolus and Biden on ABC.

It's fine if NBC wants to have a Trump vs. Guthrie debate. Just don't call it a town hall.

But if you don't vote for him, you ain't black https://t.co/2BQEBbx1bA

Biden, who said Republicans want to put blacks back in chains, just said he won’t race bait. His statement was one of the worst race baiting statements anyone has ever made.

Here Joe Biden tells police to shoot people in the leg. Trick shots on the move like Annie Oakley or The Lone Ranger….

I cannot possibly put into words how stupid this is. It’s tactically stupid. It’s stupid biologically. It’s just….it’s just so stupid that I’m embarrassed. My word, this man cannot be President of The United States. https://t.co/ilduRKvmVU

Here is President Trump on police reform – the long clip is even better:

Earlier, President @realDonaldTrump was asked what his administration would do to better train law enforcement officers and prevent police brutality.

He brought up @SenatorTimScott's bill that "should've been approved," but Democrats "just wouldn't go for it." pic.twitter.com/uPC4E16wmf

THE MEDIA is against us.

BIG TECH is against us.

THE SWAMP is against us.

THE DEEP STATE is against us.

THE HOLLYWOOD ELITE is against us.

CHINA is against us.

Voter to President Trump at #TrumpTownHall: “You’re so handsome when you smile." pic.twitter.com/WaoUM3FNLl

If you vote for Biden, you’re not a conservative. Period. https://t.co/ybHgtMoKOt

How Many Questions
Did DemocRAT Operative Comrade Stephanopoulos
Ask About This⁉️

But you know, Biden is leading. 😉 pic.twitter.com/HZFkvoqX9A

It's excellent to have a black woman nodding in agreement and showing support for Trump as he gets attacked by a hostile leftist pic.twitter.com/2XVzbn1v6a

Who had a better town hall tonight ? 🇺🇸

Following the the NBC town hall, President @realDonaldTrump took a moment to talk with the people in attendance. pic.twitter.com/1RK3iH3j53

There were more women in the @realDonaldTrump town hall than in a Bill Clinton hot tub. pic.twitter.com/eZNNvYHld0