The Democrats are already jumping on the Romney/Bain bandwagon. While these critiques are not totally fair they will have an impact.

Reuters has a firsthand example of this. Today’s special report chronicles the story of GS Technologies in Kansas City, Missouri, a steel mill that had been in business since 1888—and for decades was a major local employer. The mill work was hard, but the wages were fair, and the mill lifted “countless families into the middle class,” allowing them to buy homes, cars, and college educations.

That is, until Bain showed up.

“Less than a decade later, the mill was padlocked and some 750 people lost their jobs. Workers were denied the severance pay and health insurance they’d been promised, and their pension benefits were cut by as much as $400 a month. What’s more, a federal government insurance agency had to pony up $44 million to bail out the company’s underfunded pension plan. Nevertheless, Bain profited on the deal, receiving $12 million on its $8 million initial investment and at least $4.5 million in consulting fees.”

That’s right. The man who denounced President Bush’s bank bailouts in 2008 and President Obama’s successful rescue of the auto industry relied on a federal bailout to profit off a bankrupt company.

Mitt Romney has made the central argument of his candidacy the fact that he has been a private-sector job creator—to the tune of 100,000 jobs.

That is fundamentally dishonest—and it’s a slap in the face to those who have lost their livelihoods to Mitt Romney’s profiteering ways.

US retail sales rose less than expected over the holidays while new jobless claims climbed to a six-week high, underlining the slow pace of recovery from recession.

Retail sales increased 0.1 per cent in December to $400.6bn, missing forecasts of a 0.3 per cent rise and logging the weakest growth since last May, according to a commerce department report.

High quality global journalism requires investment. Please share this article with others using the link below, do not cut & paste the article. See our Ts&Cs and Copyright Policy for more detail. Email ftsales.support@ft.com to buy additional rights. http://www.ft.com/cms/s/0/29bdb8a0-3d27-11e1-8129-00144feabdc0.html#ixzz1jUijEZz0

“December’s retail sales figures suggest it was not a happy holiday season for US retailers,” said Paul Dales, senior US economist at Capital Economics. “In other words, households have started to pare back their spending, most probably because their real incomes have continued to fall.”

My take on Ron Paul? If I suddenly have the urge to vote for an islam-appeaser who wants to see Israel wiped off the map, has no problem at all with a nuclear weaponized Iran, and thinks that the United States is an imperial force of evil in the world, I’ll just vote for Obama, because at that point, the less-crazy metric points to the guy who DOESN’T wear eyebrow toupees. – Ann Barnhardt

This starts out as bit academic but gets rolling into something very interesting. This is a MUST see video.

For another valid view on private equity firms, Jordan Wiessmann has an excellent column where he asks:

Do private equity buyouts hurt workers?
Yes, then no. More workers get fired in the aftermath. Then more get hired.

Do private equity firms drive companies into bankruptcy?
The data isn’t complete, but some indicators say no.

Billionaire George Soros gave advice and direction on how President Obama should allocate so-called “stimulus” money in a series of regular private meetings and consultations with White House senior advisers even as Soros was making investments in areas affected by the stimulus program.

It’s just one more revelation featured in the blockbuster new book that continues to rock Washington,Throw Them All Out, authored by Breitbart News editor Peter Schweizer.

Mr. Soros met with Mr. Obama’s top economist on February 25, 2009 and twice more with senior officials in the Old Executive Office Building on March 24th and 25th as the stimulus plan was being crafted.  Later, Mr. Soros also participated in discussions on financial reform.

Then, in the first quarter of 2009, Mr. Soros went on a stock buying spree in companies that ultimately benefited from the federal stimulus.

In Throw Them All Out, Schweizer catalogs several more of Mr. Soros’s trades and says that, while “it is not necessarily the case that Soros had specific insider tips about any government grants,” nevertheless, Soros’s “investment decisions aligned remarkably closely with government grants and transfers.” 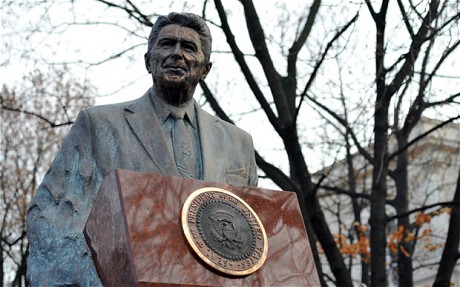 Though Reagan’s legacy is mixed in the U.S., across much of central and eastern Europe he is considered the greatest American leader in recent history for challenging the Soviet Union.

The moniker he gave it — the “evil empire” — resonated with Poles, who suffered greatly under Moscow-imposed rule.

“I wonder whether today’s Poland, Europe and world could look the same without president Reagan,” Walesa said. “As a participant in those events, I must say that it’s inconceivable.”

The 3.5-meter (11.5-foot) bronze statue depicts a smiling Reagan in a historic moment — as he stood at a podium at Berlin’s Brandenburg gate in 1987 and said the famous words, “Mr. Gorbachev, tear down this wall.”

It sits across from the U.S. Embassy on Aleje Ujazdowskie, a street lined with embassies and manicured parks in the heart of the capital.

“Reagan gave us hope,” said Janusz Dorosiewicz, the president of the board of the Ronald Reagan Foundation in Poland. He conceived of the monument and struggled for six years with bureaucracy to secure the prized location for the statue.

Several statues of Reagan have gone up this year, the centennial of Reagan’s birth. Most notably, monuments to him have been erected in London and in Budapest, Hungary, and yet another is to be unveiled later this week in the former Soviet republic of Georgia.