72% of Obama job creation in conservative “Right to Work” states 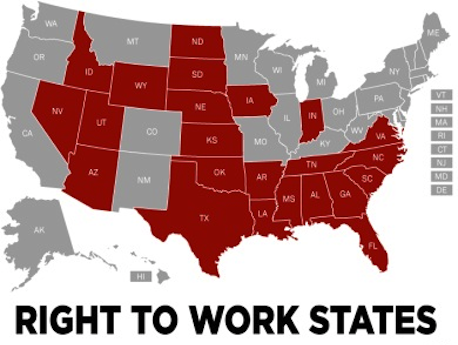 From June 2009 to September 2012, America gained some 2.59 million jobs. That weak recovery was the basis for the Obama re-election campaign. But as it turns out, virtually all of that job creation happened in states that are right-to-work – states in which no industry can force people to join a union in order to work. There are 22 right-to-work states. During that period, those states saw an increase in employment of 1.86 million. That means, according to the National Institute for Labor Relations Research, that “Right to Work states … were responsible for 72% of all net household job growth across the US from June 2009 through September 2012.”

That 72% statistic is all the more stunning when you realize that according to 2010 census numbers, the right-to-work states included in this calculation — which does not include Indiana, since it just went right-to-work — represent just under 40% of the population of the country. Right-to-work states disproportionately create jobs.

President Obama has been a violent opponent of right to work laws. He sees them as an attempt to quash his union buddies – which, of course, is right, since the unions bankrupt states (see Illinois, California). But Obama won re-election on the backs of those who rejected his policies.