Via the Heritage Foundation: 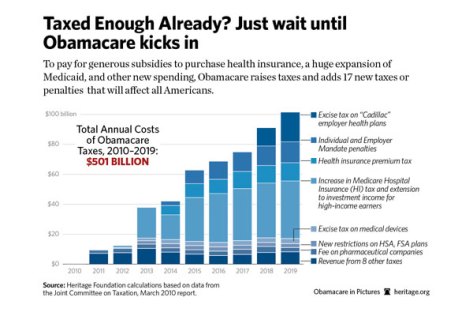 Yesterday, House Minority Leader Nancy Pelosi (D-CA) almost called Obamacare’s individual mandate a tax, stopping mid-word to call it a “penalty”. White House Chief of Staff Jack Lew and other spokespersons echoed this talking point. This is in spite of last week’s Supreme Court ruling that deemed the mandate unconstitutional under both the Commerce Clause and the Necessary and Proper Clause, but ruled that it could stand as part of Congress’s authority to “lay and collect taxes.”

But after last week, President Obama must now admit it’s a tax or admit the mandate is unconstitutional. It’s can only be one or the other.

The mandate is in fact a tax, and it’s just one of many new taxes that hit the middle class in Obamacare. Lo and behold, another broken promise. President Obama claims that the mandate is holding people responsible, keeping with that spirit, here’s a reminder of the other promises the President and his health care law are responsible for breaking:

Reality: The individual mandate is far from alone on Heritage’s lengthy list of Obamacare’s new taxes and penalties, many of which will heavily impact the middle class. Altogether, Obamacare’s taxes and penalties will accumulate an additional $500 billion in new revenue over a 10-year period. Yesterday, a senior economist for The Wall Street Journal revealed that 75 percent of Obamacare’s new taxes will be paid for by American families making under $120,000 a year. Among the taxes that will hit the middle class are the individual mandate, a 2.3 percent excise tax on medical devices, a 10 percent excise tax on indoor tanning, and an increase of the floor on medical deductions from 7.5 percent of adjusted gross income to 10 percent.

Reality: Research continues to show that as many as 30 percent of employers will dump their employees from their existing health care coverage. The Administration itself has admitted that “as a practical matter, a majority of group health plans will lose their grandfather status by 2013.”

Promise #3: “I will not sign a plan that adds one dime to our deficits—either now or in the future.”

Reality: As Heritage analysts explain, “A close examination of what [the Congressional Budget Office] said, as well as other evidence, makes it clear that the deficit reduction associated with [Obamacare] is based on budget gimmicks, sleights of hand, accounting tricks, and completely implausible assumptions. A more honest accounting reveals the new law as a trillion-dollar budget buster.”

Promise #4: “I will protect Medicare.”

Reality: A Heritage Factsheet shows the various ways Obamacare ends Medicare as we know it, including severe physician reimbursement cuts that threaten seniors’ access to care and putting an unelected board of bureaucrats in charge of meeting Medicare’s new spending cap.

Promise #5: “I will sign a universal health care bill into law by the end of my first term as president that will cover every American and cut the cost of a typical family’s premium by up to $2,500 a year.”

Reality: Obamacare does not accomplish universal coverage; it leaves 26 million Americans without insurance. Moreover, Heritage research outlines 12 ways that Obamacare will increase premiums instead of reducing health care costs. Requirements that plans allow young adults to stay on their parents’ coverage and offer preventive services with no cost sharing are already leading to higher growth in premiums.

When polled, 70 percent of Americans held an unfavorable view of the individual mandate. It’s doubtful that calling it a “tax” will dramatically change their opinion. Now that Obamacare and its broken promises remain the law of the land, it’s up to the American people to see to it that the law is ultimately repealed by Congress. Then, they can move forward with real reform that puts patients’ needs first.

One thought on “Broken Promises in Obamacare. More New Taxes.”