Where are the jobs?? 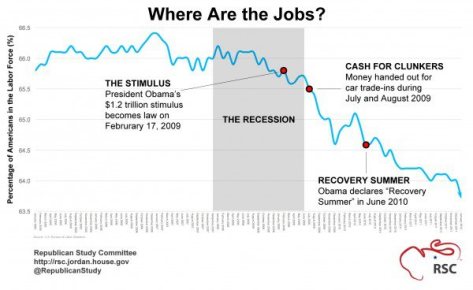 While some issues and tweaks need to still be made you must keep in mind that you are NOT the sovereign people’s nanny. Smoking bans and other nonsense that regulate every day life are what will get you tossed out of office over time as people get sick of that kind of legislating because that is not what Republican voters send you there to do.

Do not engage in what George Orwell called “the pansy left” by focusing in on “problems” that are really non-problems just so you can say that you did “something to protect the children”. Fred Upton’s light bulb ban (which he later opposed) is a good example.

Workman’s comp is a mess in this state, as is care for the mentally ill. There are small things that can be done to improve these and other problems.

Regulating where we can smoke, or how we use our cell phone and the list goes on is a prescription for government that harasses our citizens and eats out their sustenance. If people want a nanny state there is a party for that, it is called Democrats.

Obama will go out there and lie in the most flagrant ways imaginable. We need someone who can rip that kind of strategy apart.

According to the Justice Department, Homeland Security and other parts of the Obama Administration the dangerous wild card is supposed to be a conservative, white, male, military vet who believes in the Constitution, supports conservative candidates and believes in the Bible.

But time and time again what do we see with the Fort Hood shootings, underwear bombers. the guy who tried to shoot up LA Airport, Islamic students who try to mow down Christians and Jews with their SUV, leave a bomb at Times Square, and the list goes on and on they all seem to have one thing in common; they are Muslim males.

But why is Obama’s Justice Department and Homeland Security putting out a new warning every few months claiming that one flavor of traditionalist or conservative is the latest “boogie man”?

Federal authorities on Friday arrested a 29-year-old Moroccan man in an alleged plot to carry out a suicide bombing at the U.S. Capitol, the latest in a series of terrorism-related arrests resulting from undercover sting operations.

For more than a year, Amine El Khalifi, of Alexandria, considered attacking targets including a synagogue, an Alexandria building with military offices and a Washington restaurant frequented by military officials, authorities said. When arrested a few blocks from the Capitol around lunchtime on Friday, he was carrying what he believed to be a loaded automatic weapon and a suicide vest ready for detonation.

The gun and vest were provided not by al-Qaeda, as Khalifi had been told, but by undercover FBI agents who rendered them inoperable, authorities said.

They said Khalifi had been the subject of a lengthy investigation and never posed a threat to the public. On Friday afternoon, he made an initial court appearance in U.S. District Court in Alexandria, where he was charged with attempting to use a weapon of mass destruction against federal property. He faces life in prison if convicted.

Khalifi “allegedly believed he was working with al-Qaeda,” said Neil H. MacBride, U.S. attorney for the Eastern District of Virginia. Khalifi “devised the plot, the targets and the methods on his own.”

After a public television appearance Rick Santorum let a group of reporters have at him for an extended interview. Some of them tried to ask one “gotcha” question after another. Rick knocks each one out of the park. This is most educational.

The elite media always asks Santorum questions about gays or sex because they want you to believe that this is all he talks about. The facts are that Rick Santorum has a range of conservative policy initiatives he is proposing.

The free for all:

Below is the TV show on air interview: