It is no secret that Facebook “fact checkers” are a joke. A federal court has confirmed it.

“It is not reasonably conceivable that readers who read the Lead Stories’ Article would have understood “Hoax Alert” to mean that Plaintiffs were intentionally spreading a lie.”

The court ruled when Candace Owens sued Facebook’s dishonest fact checking against her  that when their fact checkers say something is a hoax or a lie etc etc that Facebook’s fact checkers are engaging in “rhetorical hyperbole.” 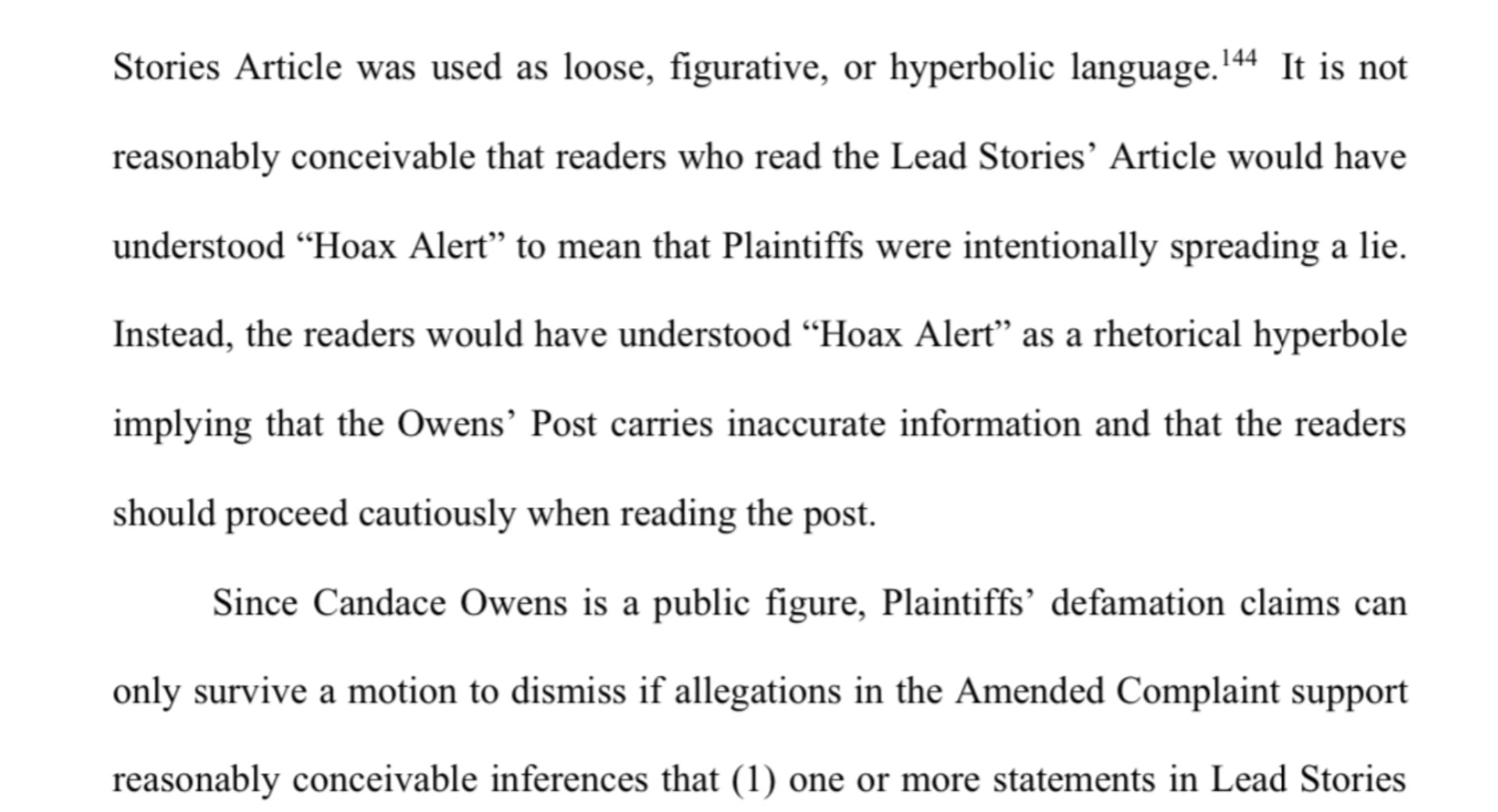 Moreover facebook’s fact checks are not even real fact checks, all they do is find someone, usually a leftist partisan, who is willing to go on record and disagree with whatever BigTech doesn’t like. Of course that means the subject is merely disputed. If the dispute by the fact checker is royally dishonest, it is not a real statement of fact as a normal person would describe it.

This is the game that smear outfits like Lead Stories, Politifact and Facebook use to keep themselves from having to make massive payouts for defamation.

In short, If 100 doctors say Ivermectin helps treat the CCP Virus (several foreign countries use it with success) some health official who gets money from Big Pharma, or government who is in bed with BigPharma, or one of the countless studies ghostwritten by BigPharma, to say it’s wrong and wallah there is your “fact check.”

One could make a generally true statement that Alaska is the coldest state in the union, but Facebook’s friends at Politifact use a tactic like this:

“No, there was a day in 1893 where a city on Oregon was colder than Alaska, so the claim is false. “

A funny meme has been going around the internet saying that two years ago we had the greatest economy in the world. The meme is funny because even though the economy was much better than by several metrics, one of the things that makes it amusing is that President Trump speaks like a salesman. He uses words like huge, great, super, best etc. Trump does not use lawyerly escape hatch language and everyone understands that. When Trump speaks he is being directionally accurate and we all understand what he really is saying.

Facebook, being the partisan killjoys that they are, was upset by this. So they asked one of the most dishonest self proclaimed fact checkers “Politifact” to do a fact check.

Not only does Politifact ignore most of the economic metrics, but they pick “economists” from partisan left wing think tanks associated with the Democratic Party

Politifact quotes Dean Baker who works at a partisan far left think tank who of course makes the claim that Trump’s economic performance..and try not to laugh….was really because of Obama:

In this achievement, Trump benefited from the continuation of trends that had been in place under the Obama recovery.

“While Trump can take some credit, I see it like the relief pitcher who comes in during the 9th inning with a seven-run lead, then boasts about winning the game,” Dean Baker, co-founder of the liberal Center for Economic and Policy Research, told PolitiFact last year. “It’s fine to get some credit for holding the lead, but this is much more an Obama story than a Trump story.”

Another economist they quote is Gary Burtless from the left wing Brookings Institution. What you will not see is an economist from Heritage, Mises, AEI or CATO.

There are plenty of economists who take the position they are told to in order to get a job. If you praise a Trump policy working at a far left think tank your employment there will be limited.

Yours truly has an economics text book written by Christina Romer and it is quite good. When she became the Obama Economic Advisor she ignored what was in her textbook and made the case for any plan Democrat’s wanted to put forth. It is a game and either you play it or you’re on unemployment.