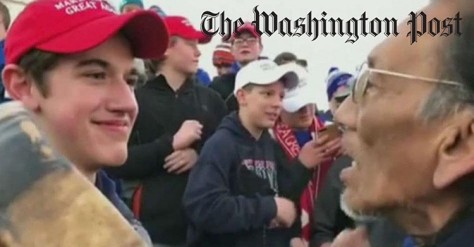 Nicholas Sandman and his classmates were touring Washington DC with a pro-life group. While waiting for their bus a mob of angry leftists came upon them and started taunting them. Nick and his fellow students, not sure what to do just stood there.

So of course CNN, Washington Post and others in the Democrat media accused Nick and his classmates of surrounding and threatening the leftists including this old man when they knew full well the opposite was true.

Nick, his classmates and his schools were the victims of threats and were put in legitimate danger from angry leftists. Anyone who Google’s Nick’s name will find page after page of smears against him. His prospects for future employment all but destroyed. So he suing everyone.

Angry leftists are still trying to get at him.

On 2/19/19, I filed $250M defamation lawsuit against Washington Post. Today, I turned 18 & WaPo settled my lawsuit. Thanks to @ToddMcMurtry & @LLinWood for their advocacy. Thanks to my family & millions of you who have stood your ground by supporting me. I still have more to do.

We have settled with WAPO and CNN.