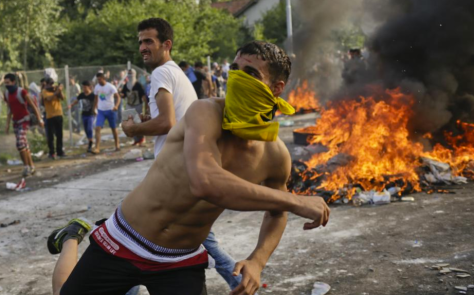 To put it in perspective Germany is only half the size of Texas.

We are back to the UK papers because American news would not dare to report this.

This was the equivalent of 780 crimes a day – an increase of nearly 40 percent over 2015, according to data from Germany’s Federal Criminal Police Office

It comes as German chancellor Angela Merkel remains under pressure over her open-door policy on immigration amid concerns over how to integrate 900,000 newcomers who arrived last year.

According to the Gatestone Institute, an international policy council, police in some parts of the country fear they are being stretched to the limit amid climbing crime figures.

Their report said: ‘During the first six months of 2016, migrants committed 142,500 crimes, according to the Federal Criminal Police Office. This is equivalent to 780 crimes committed by migrants every day, an increase of nearly 40 per cent over 2015. The data includes only those crimes in which a suspect has been caught.

‘Migrant crime statistics for all of 2016, when they become available, are likely to show a significant increase over the 2015 numbers. One reason for this is that thousands of migrants who entered the country as ‘asylum seekers’ or ‘refugees’ have gone missing.’