This is yet another example of just what these elites think of you.

UPDATE – So what do they plan to do about you problem Catholics? Look HERE.

While most people have overheard locker-room conversations like the one Donald Trump had 11 years ago, read the email below and ask yourself how many people do you know actually talk about people they are supposed to be serving with this kind of arch contempt? This is truly disturbing.

In short they say that Catholics are cowards and frauds who are too chicken to become evangelicals because their rich friends won’t see them as “sophisticated” if they did. They trash people for getting baptized and go on to state that Catholics are attracted to female oppression and being Catholic is the closest they can get to that oppression in a socially acceptable way.

In this email are Hillary’s Campaign Chairman John Podesta, her Director of Communications Jennifer Palmieri, and John Halpin from the Center for American Progress which is essentially the Clinton’s pet think tank. 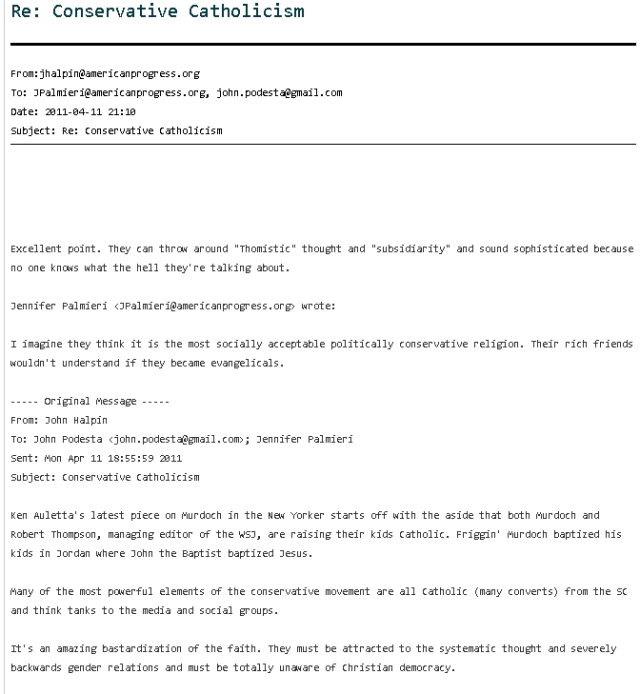 The Catholic League, an anti-defamation organization, blasted the Clinton campaign for the exchange.

“These anti-Catholic remarks are bad enough but it makes one wonder what else Clinton’s chiefs and others associated with the campaign are saying about Catholics and Catholicism,” the group said in a statement.

“Everyone has a unique faith journey, and it’s just insulting to make blanket statements maligning people’s motives for converting to another faith tradition,” Brian Burch, the group’s president, said in a statement. “Had Palmieri spoken this way about other groups she would dismissed. Catholics will be watching Hillary Clinton to see whether she thinks our religious faith should be respected, or whether it’s fair game to mock us.”

I write about politics, education, economics, morality and philosophy.
View all posts by Chuck Norton →
This entry was posted in 2016, Civility, Clinton, True Talking Points, Unhinged, WTF. Bookmark the permalink.