Remember that President Obama helped oust the pro-American Egyptian government and called it “The Arab Spring”. Well now it is done and as predicted by myself, Dr. Niall Ferguson and so many others as far back as February of last year.

Watch this video from February of 2011 and look and see how this disastrous chain of events has come about just as conservatives feared. Notice what Ferguson said about a Muslim Brotherhood regime that would be aggressive towards Israel in order to unite radicalized masses under the banner of external aggression.

A prominent Egyptian cleric when introducing the new President of Egypt in a campaign rally said that “Jerusalem will be the new capital of Egypt…“.

As it appeared that the Muslim Brotherhood was about to take power, they started giving women “virginity tests“,and they used armored vehicles against Egyptian Christians. President Obama sold them 125 M1 battle tanks and tried to give them 800 million dollars. Obama is arming the Middle East to the gills.

‘Allah is our objective; the Prophet is our leader; the Quran is our law; Jihad is our way; dying in the way of Allah is our highest hope.”

See our other Egypt coverage HERE for more details. 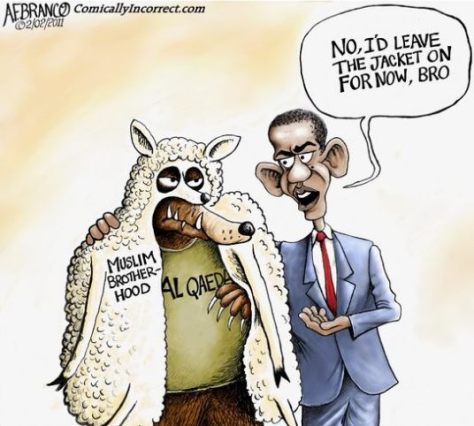 For a host of reasons this writer believes that this a part of a deliberate plan by the Obama Administration to undermine Israel’s security and ability to defend itself. Why?

1 – Polls of the Egyptian Street showed that almost 70% wanted Sharia Law and war with Israel. The administration denied these polls. The election results showed that these polls were accurate.

2 – The administration has radicalized antisemites such as Samantha Power and Robert Malley in prominent positions in the State Department.

3 – Obama made a speech advocating that Israel return to the indefensible 1967 borders.

4 – Any student of global security full well knows that the previous pro-American government in Egypt that Obama helped to remove from power was the lynch pin for Middle-East peace. Egypt  has a peace treaty with Israel that was signed by the previous government. The Muslim Brotherhood has made it clear that the treaty is shredded.

5 – President Obama’s attitude and other acts of disrespect have shown that there is a hostility towards Israel. So much so that even as far back in 2009 only 6% if Israelis saw President Obama and “pro-Israel”. See details HERE.

2 thoughts on “Muslim Brotherhood Takes Control of Egypt; “Jerusalem Will Be Our Capital””