And the only reason that unemployment is measured at 8.2% is because the under employed and those who gave up and quit looking for work are not counted. Real unemployment is MUCH higher. Here are the labor participation rates going back to 2001: 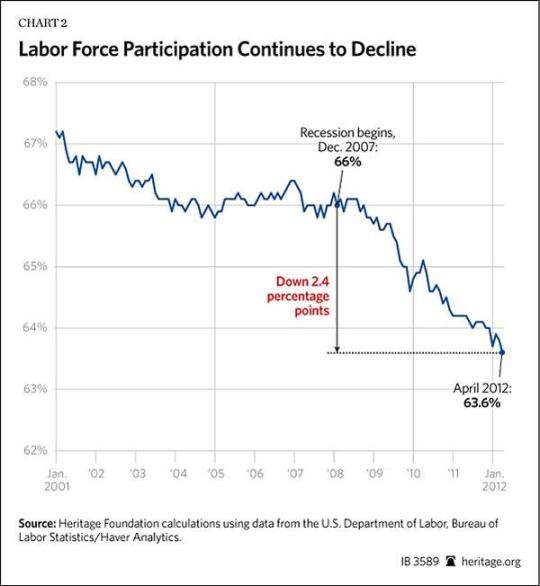 Feeble hiring by U.S. employers in May added gloom to an already darkening picture of the economy, which appears to be joining Europe and Asia in a spreading slowdown.

Employers added a seasonally adjusted 69,000 jobs last month, the smallest increase in a year, while numbers for the two prior months were clipped by a combined 49,000. The politically salient jobless rate ticked up—to 8.2% from 8.1% in April—and the report quickly became a flash point for a presidential election focused on the job-creating bona fides of the candidates.

Jobs were only one of the disappointing numbers out Friday that fueled anxiety about the U.S. economy. A separate report showed manufacturing growth cooled in May, with troublingly sharp drops in both production and exports. Another report showed consumer spending rose in April, but by more than incomes, suggesting the risk of consumers struggling to keep spending.