Holder: Lying has to do with your state of mind …..

Wow, talk about Clintonian answers. Holder didn’t mean to lie when what he said to Congress wasn’t true repeatedly…

In the document dumps the Justice Dept has delivered to Congress, there is not one email from Eric Holder on the issue, in spite of his deputies and chief of staff being all over it – Video Link

First of all, we would like to show appreciation to CBS News reporter Sharyl Attkisson. Her courage in the face of derision and implied threats to get this story right has earned her great respect. If we had an award for Reporter of the Year it would go to Sharyl Attkisson.

Documents obtained by CBS News show that the Bureau of Alcohol Tobacco, Firearms and Explosives (ATF) discussed using their covert operation “Fast and Furious” to argue for controversial new rules about gun sales.

In Fast and Furious, ATF secretly encouraged gun dealers to sell to suspected traffickers for Mexican drug cartels to go after the “big fish.” But ATF whistleblowers told CBS News and Congress it was a dangerous practice called “gunwalking,” and it put thousands of weapons on the street. Many were used in violent crimes in Mexico. Two were found at the murder scene of a U.S. Border Patrol agent.

ATF officials didn’t intend to publicly disclose their own role in letting Mexican cartels obtain the weapons, but emails show they discussed using the sales, including sales encouraged by ATF, to justify a new gun regulation called “Demand Letter 3”. That would require some U.S. gun shops to report the sale of multiple rifles or “long guns.” Demand Letter 3 was so named because it would be the third ATF program demanding gun dealers report tracing information.

“Bill – can you see if these guns were all purchased from the same (licensed gun dealer) and at one time. We are looking at anecdotal cases to support a demand letter on long gun multiple sales. Thanks.”

On Jan. 4, 2011, as ATF prepared a press conference to announce arrests in Fast and Furious, Newell saw it as “(A)nother time to address Multiple Sale on Long Guns issue.” And a day after the press conference, Chait emailed Newell: “Bill–well done yesterday… (I)n light of our request for Demand letter 3, this case could be a strong supporting factor if we can determine how many multiple sales of long guns occurred during the course of this case.”

This revelation angers gun rights advocates. Larry Keane, a spokesman for National Shooting Sports Foundation, a gun industry trade group, calls the discussion of Fast and Furious to argue for Demand Letter 3 “disappointing and ironic.” Keane says it’s “deeply troubling” if sales made by gun dealers “voluntarily cooperating with ATF’s flawed ‘Operation Fast & Furious’ were going to be used by some individuals within ATF to justify imposing a multiple sales reporting requirement for rifles.”

Read more of the emails HERE.

UPDATE – Michelle Fields at the Daily Caller with New York Democratic Party Luminaries: None of them knew what “Fast & Furious” was – LINK /w video

[Editor’s Note – I am am American of Swedish ancestry so I keep up on Swedish news.  Afton Bladet is a real paper and this is real news. The photo is “Photoshopped” as we will demonstrate further.]

Via our friends at Gateway Pundit:

What’s wrong with this picture?
The Swedish news agency Afton Bladet says Obama was photoshopped into the picture. AB insists that the president was just way to small in the picture. It must be a fake. Via Free Republic.

Indeed it is an obvious Photoshop.

Not only is President Obama sized incorrectly when inserted, but look at the light angles of the flash. Judging by the glare it is clear that the flash is being held up and to the right of where the camera is (and aimed slightly upward as well). This is a tactic that helps reduce “redeye effect” and is used to reduce the amount of glare in the photo. It is obviously a directed photo because all of the laptop screens are off. 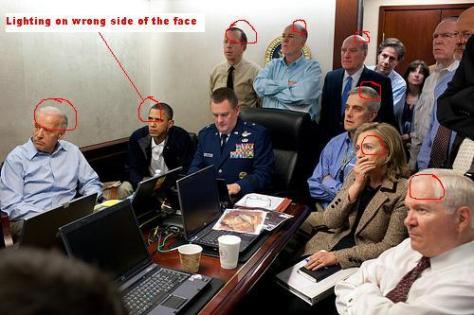 I used Microsoft Paint to add the red circles which remakes the entire picture, but if you look at the “original” photo up top examine Obama’s shoulders and then look at Biden’s. Obama is obviously a digital insertion because one can see how pixilated the angle of his shoulders are against the beige wall and one can see that Biden’s shoulders are not pixilated (they are smooth). Vice President Biden was in the room. President Obama was not.

If any of our readers like Martina McBride, …well get a load of Elle Zamudio. She is coming at you with both barrels!

Crank up the volume and turn the sub-woofer on, seriously.

To purchase song from ITunes go to: http://bit.ly/whatchildisthis

“Mr. President. We need a leader who will lead us to the moment…who will help define what the challenges of meeting the moment means… and then not to be cautious and safe and sit back and wait for someone else to do the hard work, but to get out of your chair and start doing the hard work yourself to make America a greater place,”  – New Jersey Gov. Chris Christie at the Republican Jewish Coalition’s forum.