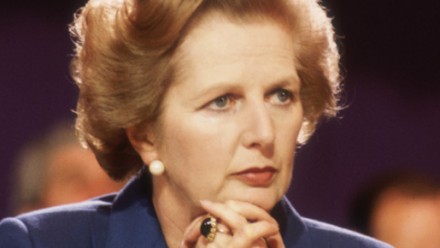 My hands tremble as I type this short memoriam to one of the greatest political heroes the world has ever known. Lady Thatcher was such a fine example. I was so fortunate to grow up in a world with Ronald Reagan, Lady Thatcher, Pope John Paul II, and Lech Walesa, the four great leaders who put an end to militant communism.

The moniker of “The Iron Lady” was given to her by the communists and was not meant to be complimentary, but she wore it as a shield. To know lady Thatcher was to love her. Those who are younger than Generation X have no idea what they have missed.

— voted to remove the precious right we gave to trade union members to take their union to a Court of Law.

Last week Labour voted for the State to renationalise British Telecom and British Gas, regardless of the millions of people who have been able to own shares for the first time in their lives.

They voted to stop the existing right to buy council houses, a policy which would kill the hopes and dreams of so many families.

Labour may say they put people first; but their Conference voted to put Government first and that means putting people last.

What the Labour Party of today wants is:

— and above all—and most serious of all—our defenses neutralized.

“She was a great person. She did a great deal for the world, along with (late US president) Ronald Reagan, pope John Paul II and Solidarity, she contributed to the demise of communism in Poland and Central Europe,” an emotional Walesa told AFP.

“I’m praying for her,” the founder of the anti-communist Solidarity trade union said.

Lady Thatcher’s stand against socialism from her final appearance before Parliament as Prime Minister:

Lady Thatcher in battle against Socialists:

Thatcher makes a brilliant point on Keynesian economic theory which has proven so destructive time and time again (1:35), “…what he was saying was If we all spend more than we’ve got we shall all be very rich. It was always a very stupid sentiment.”

Even in the mid-west and more conservative parts of the country this is what academia has managed to accomplish with the most vulnerable students.

More details at The Blaze.