Gov. Rick Perry on the stream of lies from the Obama Administration. Withholding disaster funds for political reasons.

Talk about a slow response to Katrina, how about no response because you are a Republican.

White House: Gov. Perry disrespected us because he would not greet us when the President flew in.

The Facts: Obama flew into El Paso, a two-hour flight for Gov. Perry and yet just a few hours later Obama was to be in Austin, where Gov. Perry was, for two fund-raisers. “We offered to meet the President here in Austin” says Gov. Perry. President Obama refused to meet with him.

White House: Border counties are safer than ever.

White House: Gov. Perry is not telling the truth about the fires as the federal government is paying 75% of the bill.

The Facts: The Federal Government is helping with 25 fires out of 9000. [Editor’s Note – By the way, wild fires would not be so bad if the federal government did not have restrictions on forest management such as cutting fire breaks and cleaning underbrush.]

UPDATE – If you want to see the depth of President Obama’s border security lie, the Federal Government through the BLM is posting these signs in Arizona just south of Interstate 8. This is not just on the border as Interstate 8 is THREE COUNTIES inland. 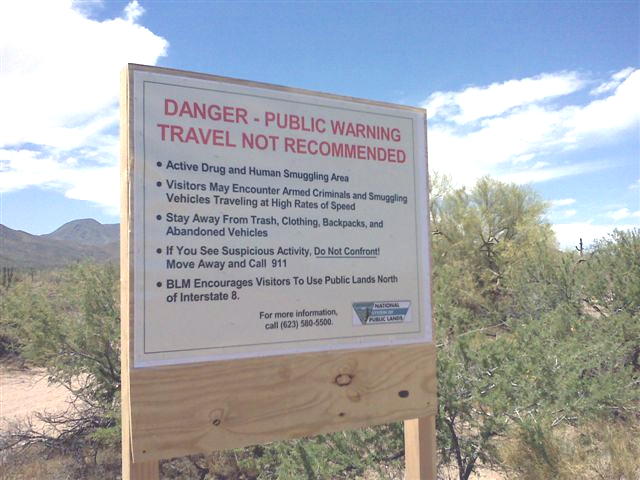 If the border is safer than ever, why are these signs needed now and say not when Reagan was in office or even Clinton?

The Arizona TEA Party recently posted this message on one of their web sites:

“Sheriff Dever’s Dept. (Cochise County) and also the Pinal County Sheriff’s Depts (Sheriff Paul Babeu) which are the two counties that are directly on the AZ/Mexican border, are now being sued by Obama and Eric Holder to prevent them from enforcing immigration laws? Mark, this situation has become extremely dangerous now. Not only are thousands of illegal Mexican immigrants crossing our border daily, we have thousands of OTM’s (Other Than Mexican….a-hem, middle-easterners).  Obama and Holder want to stop these Sheriff Depts from apprehending them, and handing them over to ICE for deportation.”

ABC’s Jake Tapper makes a few observations about the president’s border speech. He quotes the increase in border agents from the early Bush Administration, counting the increases authorized by the former president as his own. In short putting up a light fence on a few hundred miles of border when that border is thousands of miles long is hardly securing it, and neither is adding 3000 border agents which is an ounce in the bucket. Obama has hardly secured the border and in fact files harassment suits against local law enforcement to stop serious enforcement of it.

I write about politics, education, economics, morality and philosophy.
View all posts by Chuck Norton →
This entry was posted in 2012 Primary, National Security, Obama, Rick Perry. Bookmark the permalink.