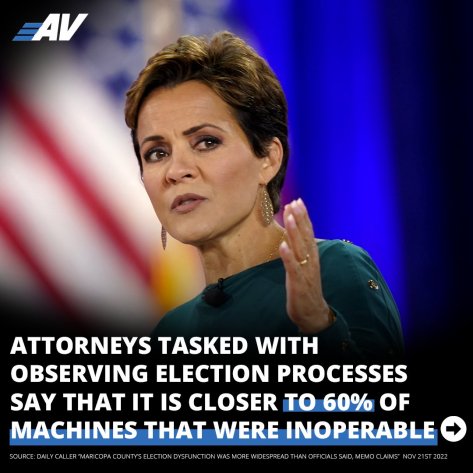 The election tabulators and printers were not only not certified properly according to law, but they were working during early voting only to have 62% of them fail on election day, the day when the vast majority of GOP voters turn out.

Lines went on for over three hours. Voters who could not stay were told to simply go to another “election center,” but when they showed up they were told they already voted at the previous election center because they had already “checked in.”

Katie Hobbs, the Democrat candidate for Arizona Governor, refused to debate and hardly campaigned, but as Secretary of State she was in charge of the election. She refused to recuse herself.

Hobbs’ lawyers have refused to cooperate with requests for transparency and answers to what happened and went so far as to engage in dirty tricks such as filing ethics complains with the Arizona Barr against state lawyers when the Attorney General got involved.

Witnesses have come forward saying that Katie Hobbs’ workers, who are STILL counting votes, have been curing Democrat ballots beyond the legal deadline.

The state legislature has stepped in and stripped Katie Hobbs of her Secretary of State powers and stripped her of her legal staff save one legal advisor and handed the powers to the Attorney General, who as of yesterday is refusing to certify the election.

Says the Attorney General in their letter posted below, which we encourage readers to examine in full, “These complaints go beyond pure speculation, but include first-hand witness accounts that raise concerns regarding Maricopa’s lawful compliance with Arizona election law.”

Ballots are missing because uncounted ballots on election day were mixed with already counted ballots. It gets better, Maricopa never finished actually “counting.”

As it stands right now countless thousands of voters were disenfranchised on election day. Other Arizona counties, seeing what is going on, are refusing to certify their elections as they suspect that Maricopa cheated.

The video below was from several days ago when the number of downed machines was believed to be 48%, but VERY much worth your time:

Bob Chapek was not the most competent CEO Disney has ever seen to be sure, but he did try to lessen the woke nonsense that was causing Disney to lose money hand over fist. The Board of Disney stopped him and snapped Chapek back into woke compliance. Now the board is blaming him for company losses.

The Disney Board brought back former CEO Bob Iger, who is a big time Democrat’s that started Disney down the woke abyss when he was CEO before Chapek.

Doomcock and Midnight’s Edge, two YouTube channels who have demonstrated that their inside sources are reliable time and time again: