There are some things that you just can’t make up. So far this particular CNN “Fact-Checker” is not amassing a very good track record.

It was predicted by countless pundits that when Facebook implemented it’s “Fake News” policy they would bring on a bunch of partisan hacks who were not honest and so far this seems to be exactly what is happening. 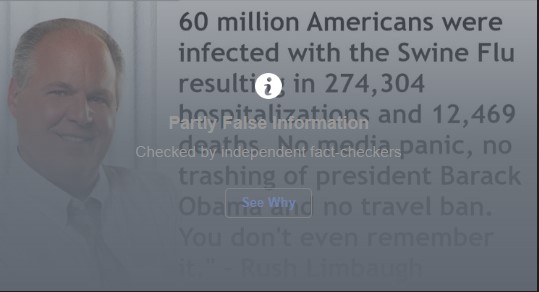 So where did Rush Limbaugh come up with his numbers? Quote right from Wikipedia:

The first confirmed H1N1/09 pandemic flu death, which occurred at Texas Children’s Hospital in Houston, Texas, was of a toddler from Mexico City who was visiting family in Brownsville, Texas, before being air-lifted to Houston for treatment.[160] The Infectious Diseases Society of America estimated that the total number of deaths in the U.S. was 12,469.[161]

Wikipedia’s source is this:

Real Clear Politics used the same reporting. Also, Sean Hannity played the media clips of what the elite media said about Obama vs what they are saying about Trump. Rush is correct on this.