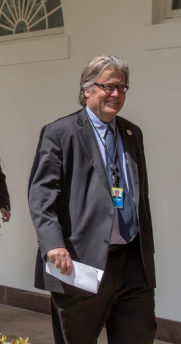 Bill Clinton did not have his chief political advisor, Dick Morris, on his National Security Council (NSC). George W. Bush did not have Karl Rove on his NSC. This writer thought that it was rather odd that Trump put Steve Bannon on his.

Politics and National Security often present a conflict of interest as we have all seen with Obama’s National Security Advisor, Susan Rice, who was in reality nothing more than a raw political operative and thug. Rice used her position as head of the NSC for political reasons. Rice survielled Donald Trump and his campaign, spread parts of the information around in hopes to damage him. In doing so she is likely guilty of multiple felonies and for the sake of the country, if guilty, this writer hopes to see her remaining productive years spent in a federal penitentiary.

Steve Bannon is a political strategist, PR genius and an ideologue. In this writer’s view he is the right ideologue in the right place at the right time. The NSC is not the place for a chief political operative as recent events have shown.

Trump has moved former Texas Governor Rick Perry into the NSC and as an expert on the Texas border just as construction of the wall is about to begin there may be no better place for him at this time.

Trump prides himself on putting the right people in the right places. As he learns in his new job we are seeing him do just that.