Trump did this before he considered running for office. Yet CNN and the other fake news networks call him an antisemite among other things. 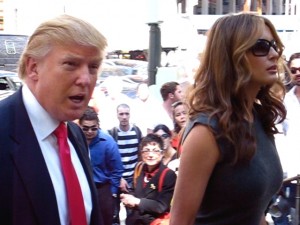 The gift, which will go towards the purchase of four ambucycles, costing $26,000 each, was inspired by his friend, billionaire Stewart Rahr.

Last month, Rahr arranged the donation of 50 ambucycles for the group through his own contribution and that of his friends.

“I just love the energy level of United Hatzalah,” Rahr said at a dedication ceremony in Jerusalem overlooking the Western Wall Plaza and Temple Mount. “I just love everyone sitting here who are part of this Mitzvah today. This is the type of organization I relate to, starting from the bottom just like I started.”

Rahr, a well known New York personality who calls himself “The King of Fun,” has known Trump for several years, The Media Linerecently reported. Trump told the publication how Rahr once attended a charity dinner where the real estate tycoon was being honored and “just stood up and gave a million dollars.”

United Hatzalah is Israel’s first and largest all-volunteer emergency rapid response service. It has a fleet of over 250 ambucycles and uses cutting edge patented GPS based dispatch technology.